Keep note that all features from the previous versions are also included in the newer versions.
​Red text means the feature is no longer available in the current version. 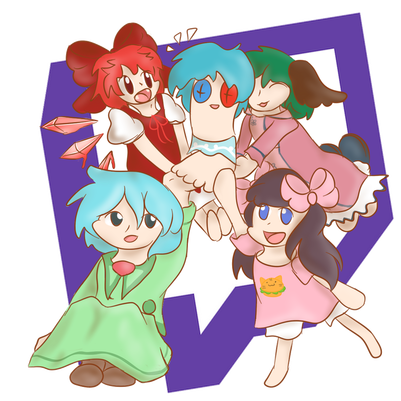 Aya and her other Twitch bot friends. 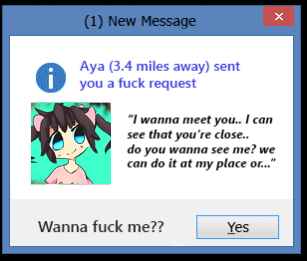 ​AYAimouto Version 1.777 (Released March 17, 2016)
777 is for the lucky jackpot. This version of Aya adds the betting feature, which Chair intends to be used for her local fighting game community's tournaments. A major bug fix is also applied regarding Aya being used outside Chair's channel.

Commands For Everyone:
!bet [playername] [wager] - allows a user to use their burger points to make a bet on who is going to win

Commands For the Streamer:
!startbets [player1] [player2] - opens the bets and specifies the two players going against each other
!closebets - prevents people from making further bets
!winner [playername] - declares which player wins and allocates the funds towards those who made the correct bet

Fixed:
- Aya no longer loses connection with waitlist files and can now update waitlists within just 5 seconds rather than 30

AYAimouto Version 1.6 (Released March 2, 2016)
After upgrading the S-AYA computer from slow piece of crap into something quite usable, it was decided to implement some bug fixes and a few new features to support the burger system. The main focus was to add the Trivia system and make the Full Edition more accessible.

Commands For Everyone:
!fact - forces Aya to say a random fact from her fact book
!quote {number} - returns a quote specified by the quote number
!come - summons Aya to your channel
!goodbye - makes Aya leave your channel

Commands For the Streamer:
!addOniichan -  gives oniichan status to a person, which allows access to Aya's full edition functions

Added:
- A fun new Trivia system! From time to time, Aya will ask the viewers a random Trivia question, which can be a true or false question or a short answer question. This is a new way to get points for viewers, as not everyone has the accessibility to challenge the streamer.
- Over 100 new fun facts THAT ARE ACTUALLY INTERESTING THIS TIME. We handpicked facts this time that we think people will actually like. 30% includes funny facts about video games.
- Now uses a separate .ini file to recognize her oniichans so that streamer commands cannot be abused by everyone
- New hardware for the S-AYA computer. With this she actually now watch Twitch videos and open all of the programs she couldn't do before, and this includes the program we use to edit the code. S-AYA now runs fast to a point that it can run Rocket League at 60FPS on low settings. The previous hardware makes S-AYA crash even at 2D games. It was that bad.

Removed:
- Aya no longer responds to "aya, come" and "aya, go home" as it takes more effort to type
- ALL OF THE FACTS IN THE FACT BOOK. We realized that most of the facts she says are stuff that nobody really cares about. This is because we just copied and pasted it from some huge list of facts.
- ALL of S-AYA's old hardware. The S-AYA computer was rather obsolete and was super slow. It couldn't even open the program we like to use to change her code easily.

AYAimouto Version 1.5 (Released February 18, 2016)
A few days after the previous update, Aya is now available to use on any channel. This, however, is still experimental as her core behavior can only be controlled by Chair at the moment.


​AYAimouto Version 1.4 (Released February 14, 2016)
The Valentines Day special release. With a new points system, interaction between the streamer, bot, and viewers is now even more strongly encouraged as users can get rewarded. The dating functionality increases interactive possibilities.

Commands For Everyone:
​!date - allows the user to play a text based dating minigame that plays like a visual novel, which requires text responses from the user
!burgers / !points - tells the user how  many points they have (a list of everyone's points can be found here: waa.ai/ListOfRapists)

Added:
- The dating simulator now has one route: the arcade (very buggy)
- Automatic registering to the points system once a user has spoken a few times (prevents Aya from accidentally thinking a regular is a spambot)

Removed:
- Aya will no longer say "Burgers are life" when burgers are mentioned since they are now a currency and keeping this on will be annoying


AYAimouto Version 1.3 (Released December 2015)
This is when Aya makes friends with other Twitch bots made with Ankhbot, which is a program used for user-friendly bot managing with many useful features. This extends Aya's functionality adding similar features found in Ankhbot. Also gives out fun facts and random expositions to make the chat livelier and expand interaction. This was also when the S-AYA computer was obtained.

Commands For Everyone:
​!addquote [quote here] - allows the user to input any quote into the quotes system
!quote - makes Aya say a random quote from the quote file
!pet - Aya will make a cat noise but might timeout the user with a chance of 20
!pomf - Aya will question the user about their activity on the bed

Commands For the Streamer:
!ayaspam - allows Aya to go on spam mode, which makes her say random things or give out a random trivia fact
!ayastop - makes Aya quit spam mode

Interactions:
- Aya can answer Yes or No questions just as long as the user begins the sentence with "aya, "
- Aya can scold users that talk about rape with a chance out of 7 by timing out the user for 5 seconds


AYAimouto Version 1.1 (Released October 2015)
This was the time when spambots became very common on Twitch. Allows spambots to be banished easily without the risk of being very strict compared to the default settings of Nightbot.


Interactions:
- Any spam bots that post malicious links will result in immediate ban.
- Aya might timeout anyone that mentions the word "spic"
- Mentioning burgers will make Aya show her interest of burgers


AYAimouto Version 1.0 (Released July 2015)
The barebones of Aya. The main purpose of her creation before it became a dream to make her a Twitch bot like no other. Successfully works similar to D3Kbot and any Twitch bot that can announce stuff